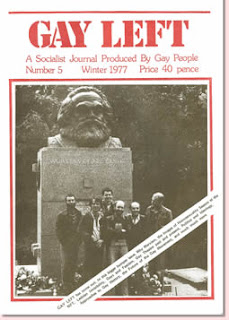 The anti-National Front mobilisation on August 13 1977 had many strands, one of which an organised lesbian and gay presence.

According to Gay Left, a socialist magazine from the time: 'at the battle of Lewisham this August against the fascist National Front, large numbers of lesbians and gay men were in the forefront of the struggle which forced the fascists to scuttle along the pavements rather than marching down the roads with their disgusting banners... many gay men took their lead from the women's group which was well stewarded, highly disciplined and sang the best songs throughout the march and demonstration'. The article also states that the 'gay movement ...[did] help to shape these events by our presence, for instance, on organisational committees at Lewisham (Nigel Young, Crossroads - which way now?, Gay Left, no. 5, Winter 1977).
Posted by Transpontine at 01:03