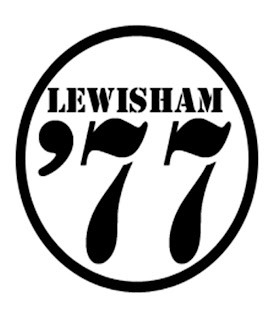 Where were you on Saturday 13th August 1977?
“The 13th August 1977 was a turning point for Lewisham and for the fight against racism in Britain” (Jim Connell, Lewisham '77 organising group)
Saturday 13th August 1977 was the day of the Charity Shield match between Manchester United and Liverpool at Wembley. This dull 1-1 draw was not why London was the focus for the nations media. It was a much more remarkable struggle in Lewisham, South East London that made history, affected the nation and divided friends and families over the issue of racism.

The battlelines were drawn when the National Front mobilised 600 activists and prepared to march from Fordham Park to Lewisham Town Centre in an intimidating gesture towards local migrant families, protected by 4,000 police officers. But instead of the intended show of ‘white supremacy’ 10,000 local residents and militant anti-fascists met them, crowded the streets and refused to let the NF pass. Huge numbers of police were drafted in and the National Front were able to proceed but scale of the disturbances caused by their presence was unprecedented on London’s streets. The Police broke out riot shields for the first time on the British mainland.

Eventually they arrived in Lewisham Town centre but they were a tired, scared and defeated group. The day marked a turning point in both local and national mobilization against racism. Today the BNP, heirs of the NF legacy are reluctant to march openly and this is in some part due to the victory of anti-fascist forces

Lewisham ’77 is a series of events which will commemorate this remarkable day and attempt to examine what relevance this very local struggle has for us today. It is a combination of local history project, commemoration, and celebration.

The Commemorative Walk
Saturday 15th September 2007 at 3pm. The walk will begin at Clifton Rise off of the New Cross Road (next to the New Cross Inn) and will proceed along the route that the National Front took 30 years ago. Along the route those who have memories of the day will relate their own experiences and we encourage participants to bring their own stories. The walk should take approximately 2 hours and will conclude with a further chance to share in conversation and debate.

Getting involved
We are keen to hear from anyone who has a memory of the day and would like to contribute to the commentary of the walk. We are also creating an audio/visual document that will be shown at the next Lewisham ’77 event in November. We would like to hear from anyone who has any memorabilia from the event including photos, leaflets, flyers, etc.
We are happy to facilitate your participation in this project in anyway we can. Please contact us on the details below if you would like to share your memories.
We welcome assistance from anybody who would like to be involved in organizing and supporting the events in any capacity they can. Contact details below.

The purposes of the Lewisham '77 are to:
- provide an opportunity for people to tell their stories about what happened
- understand the events in the context of racism and resistance in the 1970s
- reflect on the meaning of these events for today

Further events
There will be a series of subsequent events taking place to mark the anniversary of the Battle of Lewisham and information will be provided closer to the time. Information is on our website. Please feel free to contact us to discuss these events.

Partnerships
Lewisham ’77 is the collective effort of a number of individuals, local historians and activists with the support of the Centre for Urban and Community Research and the Centre for Lifelong Learning and Community Engagement at Goldsmiths University of London, and the South London Radical History Group.
Contact details
Email: lewisham77@gmail.com, tel: 07876 144535 , Website: http://lewisham77.blogspot.com/
Posted by Transpontine at 04:25