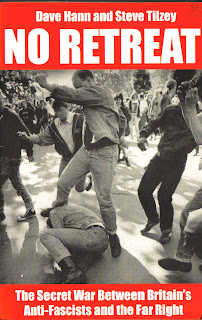 The following account of Lewisham '77 comes from the book No Retreat by Dave Hann and Steve Tilzey, describing their involvement in militant anti-fascism. According to Tilzey, he had originally been planning to come down to London that day to watch Manchester United play in the Charity Shield, but had inadvertently got caught up in an anti-fascist attack on a coach booked to bring National Front supporters to London. Travelling on to London, he ended up in New Cross:
'The police obviously wanted to break up the gathering and moved in to disperse the crowd. There was a lot of confusion and the police seemed to lose it. Quite a few people got hurt and a number of arrests were made. The police backed off, then made another charge, this time with horses, causing all sorts of injuries and mayhem. All this and not a single NF supporter in sight.

…along with the other anti-racists, I pushed and shoved against the police lines. I was not actually doing much more than that when I got whacked on the shoulder with a truncheon. I went down on my knees, the wind completely knocked out of me. A couple of the lads dragged me up and took me over to a shop doorway to get my breath back. The police were attempting to clear a path for the NF march but were struggling against huge numbers of counter-demonstrators, and had begun to lash out with their truncheons. Some of the demon­strators were also trying to break through police lines in an attempt to get to where the NF were assembling. I managed to get my breath back, and although my shoulder was still very painful, I wasn't at all put off, and threw myself back into the middle of the action.

The NF had gathered and under heavy police protection were readying themselves to march up Clifton Rise. Some people had managed to break through the police lines and as the march started the NF came under a hail of bricks and bottles. At the head of the march, I could see about twenty-five very heavy-looking guys. These, I later learned, were the NF's Honour Guard, essentially a hand-picked protection squad for the Front's leader, John Tyndall. A few yards behind them were the Colour Party, which consisted of about fifteen blokes carrying Union Jacks on metal-tipped flagpoles. The Colour Party marched in front of the main body of the NF supporters, which was surrounded by hundreds of policemen.

Several attempts were made to attack the march, which slowed its progress as the police struggled to clear a path through the counter-demonstrators. I threw a few bricks and stones at them, and also aimed a few kicks at one group who had broken away from the march to attack the anti-nazis. This lot were pummelled to the ground by fists and boots as superior numbers of counter-demonstrators piled into them. All along the route of the march the NF were getting serious problems as fighting and skirmishing broke out between the two sides. At one point the march was smashed completely in half as hundreds of anti-nazis broke through the ranks of police and engaged the Front in vicious hand-to-hand fighting.

On Lewisham Way, anti-racists and local people attacked the front of the march, and waded into the Honour Guard and Colour Party. The NF were now getting it from all sides…The Front did put up some resistance, and gave a good account of themselves at times, but they were completely outnumbered, and didn't have the weapons to hand that we did. Fighting was still going on in several areas, with a lot of the NF supporters now looking the worse for wear, but even with police protection the march was eventually stopped on Lewisham High Street. Fronters were running around in a blind panic, and the march just seemed to disintegrate as wave after wave of attacks hit them from all sides. Shortly afterwards the police put them on coaches and trains in a bid to stop all the violence. However, small-scale skirmishing continued. NF coaches were bricked as they left the area and the police again attacked the counter-demonstrators. Fighting went on under the clock tower for quite a while after the NF had left Lewisham, with the police now armed with riot shields. I found out later that this was the first time that they had been used in England.
Posted by Lewisham77 at 10:24