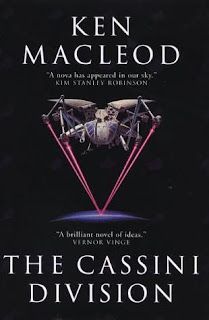 So far we have only come across one reference to Lewisham '77 in fiction. It comes from Ken MacLeod's excellent science fiction novel The Cassini Division (1998).

Set in the 24th century, it features a visit to the ruins of London by Ellen May Ngwethu from the Solar Union, the interplanetary socialist society that dominates the solar system. She lands at Alexandra Port (the Ally Pally) and visits the People's Palace as it is now known:

'Dinner was in the great hall, with one of the daily planning-meetings before it (we sat out in the bar) and a dance afterwards. The hall, a former exhibition centre, was decorated with murals depicting episodes from London's history: the Plague, the Fire, the Blitz, the Death; the battles of Cable Street, Lewisham, Trafalgar Square...'

The author was involved in left politics in London in the 1970s, so may have been at Lewisham himself - we will try to find out.
Posted by Transpontine at 02:41

I was there all right!