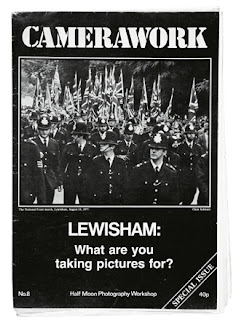 The How We Are: Photographing Britain exhibition currently at Tate includes this image from Lewisham 77.
Shami Chakrabarti, director of civil-rights group Liberty, selected this as her favourite picture in the exhibition, telling The Guardian: "You can't think of Britain without thinking of the flag". It’s a photo that is typical of those images she saw as a child that left her “feeling somewhat ambivalent about the Union flag and who owned it.”

Camerawork was a radical photography journal which devoted a special issue to Lewisham '77. According to this review 'Camerawork published some 25 pictures from this event, together with the full text of the address by the leader of the National Front with an analysis of their racist views, articles by Tom Picton on the press coverage including a detailed analysis of all pictures printed, a visual analysis by Derek Boshier of the front page account of a leading daily newspaper and lengthy interviews with 8 freelance photographers covering the event (one of which had to be pulled at the last minute for legal reasons, leaving blank space), discussing why they were taking photographs, what they were trying to show, how they were treated by demonstrators and police, and how their pictures were used.'

Link: The Camerawork Essays, review by Peter Marshall.
We would be interested in hearing from anybody who was involved with this.
Posted by Transpontine at 15:42

i got a copy of this I know people who were involved mostly SWP.